This week in the PGA tour, it is the CIMB Classic. This is a relatively new event added to the PGA tour and co-sanctioned by the Asian Tour – and even newer at the current course.

The CIMB classic launched in the 2010 season as the CIMB Asia Pacific Classic Malaysia, and was first won by Ben Crane. The event at that time was held at the Mines Resort & Golf Club.

It would move to the new location of the Kuala Lumpur Golf & Country Club last year. There, Ryan Moore won this tricky course on a playoff by beating Gary Woodland, after the two ended at -14 after 4 rounds of golf.

It’s interesting looking at the history of this Par 71 course. You generally need consistency throughout, and only one golfer last year was under par for all four rounds which was Gary Woodland. Moore only got there thanks to a 63 first round – he ended up shooting over par in the second round.

Let’s check out the odds for the top 10 favourites for the CIMB Classic:

Interesting odds there, with last years winner low. That’s a good example of how this course works – they believe Moore only won last year because of that amazing first round to the point they have the more consistent Gary Woodland higher up. Let’s get on with the betting tips.

Matsuyama played here last year. He came tied for 25th, and shot under par the first two rounds. However he went +1 in the 3rd round and then +3 in the 4th round.

Matsuyama has been playing some great golf this year however. In the two tournaments he has played, he has two top 10 finishes. He came tied for 3rd in the Frys.com Open and tied for 10th in the Shriners. We’ve been aching to pull the trigger on him since the season started, and now is the time to do just that.

Matsuyama is going into this one confident – he was even quoted in the media this week saying how confident he is, and he is in the best condition of his life. The 3rd top player in the PGA Tour Power Rankings – he sounds very, very motivated and we like him to play well throughout.

That’s all that we are doing this week for the CIMB Classic. However we are going to be playing daily fantasy golf at DraftKings. I highly recommend joining us there as it’s fun and you can enter super free. Click here for that.

Here is who we are going with:

Hideki Matsuyama: Of course. We picked him here so we’re going to have to bet him.
Chesson Hadley: He’s been quite disappointing so far this season after a lot of high expectations. With the pressure now off him – he’s a whopping 90/1 at the sportsbooks – we’re hoping to see some better golf from him.
K.J. Choi: Absolutely no sound reasoning for this one. Looking at the lower salary amounts, he stuck out to us and then looking at some stats, he stuck out again. He will probably cost us it but hey – we have to pick the Tank.
Brendan De Jonge: Based on his current tour form, he should be there or thereabouts we think.
Ryan Moore: Last years winner – can he pull off the lucky round again? We’re going to gamble he will. That leaves us with $8100.
Kevin Streelman: Worth $7,800 and Streelman has been hitting some great shots lately. He’s also got experience here and we hope he goes on a good run.

Unfortunately, Matsuyama could only get a tied for 21st finish. He ended up at -7, and needed to be -12 for a cash.

Matsuyama just could not get going throughout the tournament, with very average rounds and that was disappointing. At least he was generally consistent – as opposed to someone like de Jonge who shoots a 65 one round, and a 73 in the other.

The very inconsistent Ryan Moore, who won last year – actually had some consistency as he won this year for the second time in a row. And we actually cashed at DraftKings yay: 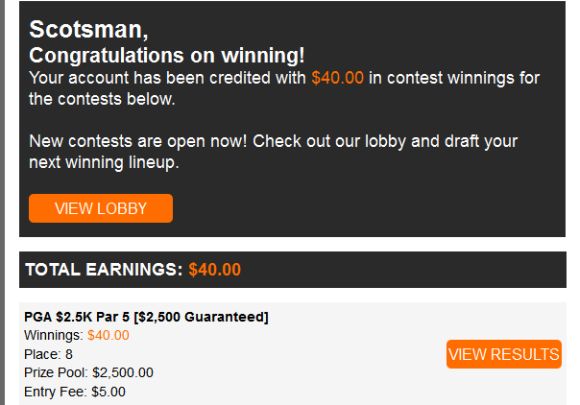