There’s quite a few names missing from the Shaw Charity Classic this week, like Bernhard Langer. Due to that, Colin Montgomerie goes into that as the favourite.

We also have the first chance to celebrate since the Senior Open – when we cashed out a bet on Bernhard Langer. We had him to win with $300 to return $2100, and watching it we could have cashed out around the 13th hole for $1500. We decided to stick with him and then watched as he played worse and worse – and yep, knew it was time to cash out. 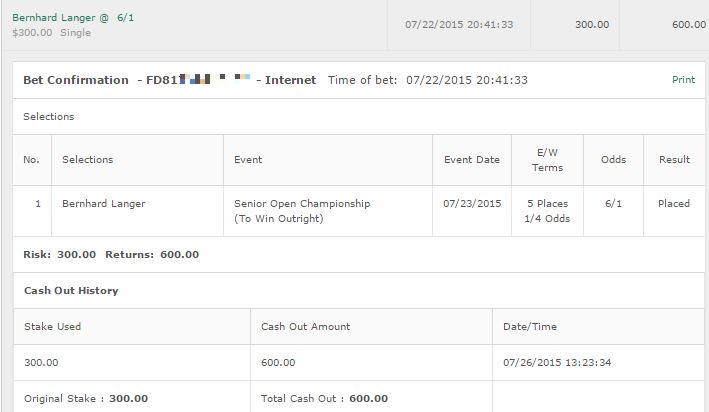 Only got $600 so that was disappointing – but hey it’s better than a big fat $0 . This is why you need to bet at because then you can cash out your bets, and even when your golfer loses, you win!!! You can even do partial cashouts.

So anyway it’s the Shaw Charity Classic. This tournament takes place in Calgary, Alberta Canada and first joined the Champions Tour in 2013. That year, Rocco Mediate dominated it and won by a whopping 7 strokes.

The next year they changed it to a Par 70 and that made for a more exciting finish. It went down to a playoff with Fred Couples vs Billy Andrade and was extremely exciting with Couples taking it down.

With that let’s get onto the betting tips:

We love Kirk Triplett here at the GBT Offices – he’s won us a fair bit over the years. And we’re hoping he can do it yet again.

Triplett goes into this one at a high 28/1 despite the fact that in 2013 he shot a -4 for a tied for 3rd place. Granted last year he struggled with a -1 but it happens.

Like we said – we like Kirk, and we’re always watching him. He’s probably the golfer we monitor most on the Champions Tour. And he seems to be heating up with a couple of places in the low 20s followed by 7th at the 3M Championship.

Let’s go for Half a unit on Kirk.

Bet: Half a unit on Kirk Triplett to win and E/W at .

That’s all we have in the Champions Tour for this week.