What a load of crap – the Green Bay Packers had that game all wrapped up last night, and then garbage time hit and they let the Falcons back into it.

Thankfully, we had cashed out at the half for -120 odds. That’s a feature available at a lot of sportsbooks and we had the bet available at Bet365. That was the second time we did that yesterday actually.

We also had bet Man Utd to win(on top of the over 2.5 tip from yesterday) at 6/4 odds. When they scored to go up 2-1 we patiently waited until the odds were at 2/1 then cashed out.

Still – if you’re sitting there raging about the Packers, hopefully this will warm your cockles: 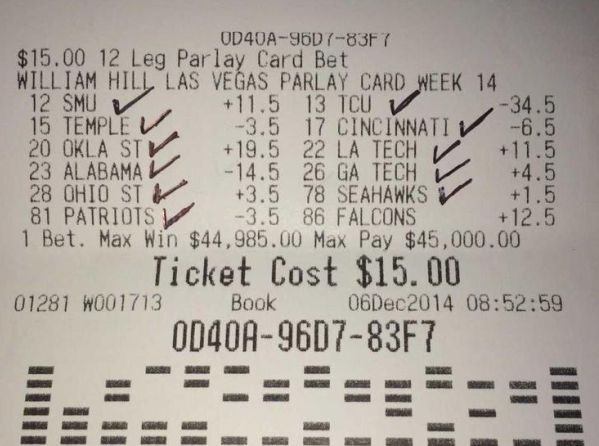 That guy had a $15 ticket and was waiting on just the Falcons to cover. You can imagine his disgust at half time, and then the euphoria as the Falcons came back into it. I’m sure he hedged it anyway – I bloody hope so at least – but what a finish.

We went 2-0 in the NHL which was great – we had the Devils to win and they did that, beating the Hurricanes 2-1. We also had over 5 goals in the Blues and Panthers game and that went over with 6 goals total.

Only the one betting tip today, and we’re going to take the Phoenix Suns -5. Honestly we think this is a bad line and it should be a lot higher. The only reason it’s so low is the Suns are playing back to back games. And yeah they went to overtime with the Clippers – but this is a team that also beat the 76ers, flew to Indiana and destroyed the Pacers all within 24 hours. They also almost beat the Rockets the other night on a back to back.

Basically – back to back is not that much of a concern for the Phoenix Suns.

Suns should exploit the 3 pointers tonight and get the win.

First – we cannot write off the Buffalo Sabres. They have been performing very well lately. But the Kings, who beat them 2-0 last time out, should do another professional job tonight. We like this to be a quiet game and we’ve been going back and forth on it – but we’re going to take Kings in regulation at 1.83 odds, as opposed to Under 5 goals. The under is 1.80 and we like the extra 0.03.

We’ll also be taking Flames vs Leafs Over 5.5 Goals. Leafs are always good for the high scoring games, and the Flames will want to get back on the winning track. We like this one to be a nice, fast paced game with a good 6-7 goals in it.