Thought I would combine the EPL Bets and Fantasy into one post this week.

Wolves To Win: 1.87 odds, love the price. I backed them last week to win over Watford as I felt it was just schedule woes for them more than anything. They delivered and can build on that here and this is a 2u play for me while everything else is 1u, in terms of confidence.

Norwich To Win: Good price of 2.19 for Norwich considering their current record is based purely on a tough fixture schedule. Worth a shot.

Villa / Everton Draw: 3.35 odds, 0.5u play on the confidence scale. A mix of Everton playing well but Villa solid at home so far.

Support Us: We now have a Patreon where we provide some tips exclusively to people who support us on there. Join them!

Last week in EPL Fantasy, we finished 15 points out of the cash. It was that one crushing Newcastle goal as we et heavily on Man Utd having a clean sheet. If they hadn’t scored it would have been a profitable week despite my theory of Southampton vs West Ham being a banger not coming to fruition. 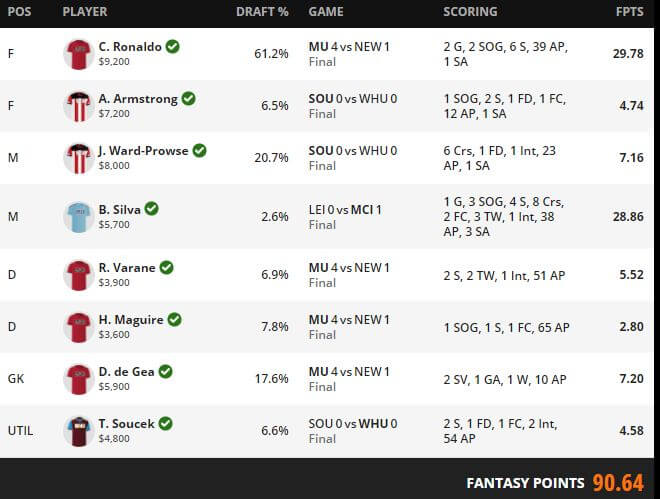 That Silva pick with only 2.6% picking him was a banger.

Here’s the record of how we are doing so far:

There are 4 games this week on Saturday at 3pm which we will be entering. This is Burnley vs Arsenal, Liverpool vs Crystal Palace, Man City vs Southampton, Norwich vs Watford.

Support Us: We now have a Patreon where we provide some tips exclusively to people who support us on there. Join them!

GK – Ederson. It was between him and Allison. City give away less chances, so more likely clean sheet. Plus I’d rather not back against Edouard this week.

D – Joao Cancelo. Southampton concede sixth most crosses in EPL and he is coming off getting a goal in midweek. Also gets a shot each time he starts. At $5,500 he is great value.

F – Teemu Pukki. I like Norwich to win this weekend and he seems most likely to score and can get the shots in. I think we see a similar game from him like against Leicester where he racked up 16 fantasy points.

D – Andy Robertson. Both Liverpool full backs get a ton of assists, put that along side a clean sheet and they can be big point getters. Robertson is much cheaper than TAA, so we will go with him.

M – Raheem Sterling. Sterling didn’t play start in the midweek Champions League game, but I’m assuming that the Man City rotation is about to really kick in. Sterling brings goals and assists when he plays.

F – Pierre Aubameyang. Yip, going for an Arsenal player. This is probably the best decision of the week, or the worst decision which will get brought up for the next 8 months. Got to expect an Arsenal victory at Burnley this week, hopefully he comes up with some goals.

UTIL – Virgil Van Dijk. Not usually the position to go for with a utility player, but I’m hoping for the clean sheet points and perhaps a goal from a set piece. At $4,200 he is a bargain and lets us spend in other areas

Support Us: We now have a Patreon where we provide some tips exclusively to people who support us on there. Join them!
Follow @SBTSportBetting