After cashing in Week 2, we had a tough Week 3.

I bet against Crystal Palace and their low xG by going with the West Ham keeper and a defender.

That did not work out too well.

The nice thing is it was between them and Brighton and they conceded twice so I would have lost either way. That’s a positive right?

Here’s how our team did last week: 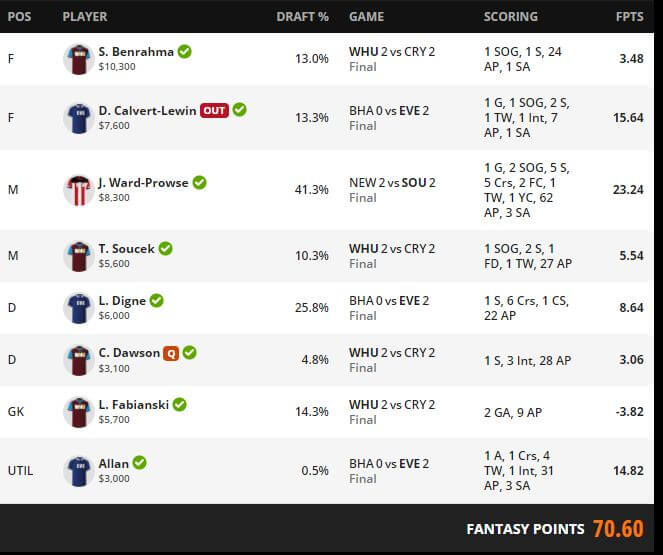 Would have needed 28 more points to cash.

We have a big side bet between us and here are the current points:

Some would say I slightly let us down last time out. Just slightly.

There are 5 games this week on the Saturday at 3pm which we will be entering. This is Arsenal vs Norwich, Brentford vs Brighton, Leicester vs Man City, Man Utd vs Newcastle, Southampton vs West Ham and Watford vs Wolves.

GK – David De Gea. From the fixtures, Man Utd look the closest to a sure thing of winning and keeping a clean sheet this weekend. De Gea is actually a decent price at $5,900, worth the risk.

D – Harry Maguire. Another bargain considering that Man Utd look good for a clean sheet. Its almost like I am saving money for someone.

M – Bernado Silva. Love this guy, great for goals and assists, hopefully will see a lot of the ball against Leicester and should build up a good amount of points.

F – Cristiano Ronaldo. He has to be picked, just can’t resist it. Will take over the penalties and free kicks, will be involved in everything and his goal scoring record speaks for itself.

M – James Ward Prowse. This was my first pick. I wanted someone in the Southampton vs West Ham game which I believe will be very open and we saw him bring in the points against Newcastle. Happy to back him here.

D – Raphael Varane. Good debut for him against Wolves and got the assist. Fraser already backed Man Utd for potential clean sheet and happy to jump on with that and go down with the ship if we have to.

F – Adam Armstrong. He’s played every minute for Southampton and only the one goal so far but this could be a good one. Getting a lot of shots. As I see this as a high scoring game it makes sense to pick a striker from this game.

Utility – Tomas Soucek. This was one where I used Fantasy Football Scout to pick up the highest projected player I could afford. Just happened to be in that game.

This leaves us with $1700 on the table amazingly in remaining salary. Money to play with if we need it tomorrow with any late decisions.