The Open Championship finished without a ton of drama as a local boy won it. It wasn’t Rory McIlroy as so many had predicted coming into the tournament, his bad first day did him in, but instead it was Ireland’s Shane Lowry. It was only his second win on the PGA Tour and the first major victory for him. Lowry had a fantastic third round where he set a new course record with a 63. He beat Tommy Fleetwood by six strokes to secure the Claret jug.

As of this writing, we are nine days away from the MLB non-waiver trade deadline and I’m really wondering if we are going to see a lot of movement as the list of sellers is low. A look at the National League Wild Card race reveals that a lot of teams are still in it. 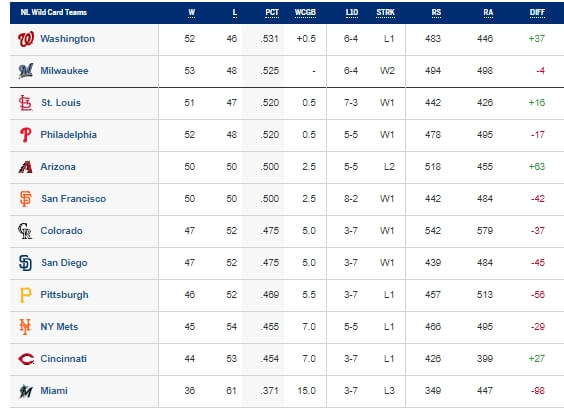 You have to feel bad for the Reds who are having a good season in the run differential category, but just aren’t there in the win column. This team has a lot of good pieces and would be a good seller, but after the last couple of years they have had that is something that they definitely aren’t going to do. The same can be said about the Padres and probably the Mets so that leaves Colorado, Pittsburgh, and Miami as the only potential sellers in the National League.

The American League doesn’t offer much as teams like Baltimore, Kansas City, and Detroit are already stripped down to the bare bones. The White Sox are in the midst of a youth movement so likely won’t be doing much which just leaves Toronto and Seattle as the teams looking to deal. Again, they have already stripped down quite a bit this season.

So it could be a quiet deadline unless something crazy happens. That said, it looks like we are going to get a great race down the stretch and with things being so tight – something crazy very well could happen.

All betting tips are made using the Bet MLB System. The system has a 105-63 record on the season.

New York Yankees at Minnesota Twins: This is a big time proving series for the Twins. They have been atop the AL Central all season and now get a preview of the type of team they’ll be facing in the playoffs. This should be a good one.

I like the Twins tonight and a big reason for that is CC Sabathia’s road numbers. CC has a 5.84 ERA/6.76 FIP in his road starts this season with a huge 2.68 HR/9 rate. This Twins offense has been one of the best against lefties this season with a 125 wRC+.

The Twins send Martin Perez who is also a lefty and he has a 4.10 ERA/3.80 FIP on the season. This is an undoubtedly tough match-up for him, but on the season the Yankees have just a 91 wRC+ against lefties. That is below average and far from the huge numbers they put up against righties. This is a nice play for Minnesota.

Texas Rangers at Seattle Mariners: I always have reservations when the system says the Mariners look good, but I have to agree with the system here. They do look good.

Marco Gonzales is really overdue for a good home start. He has a 5.46 ERA/3.77 FIP in his home starts this season and that ERA is bound to come down. The 54% left on base percentage is really hurting him. He gets a good opportunity tonight as the Rangers have just an 81 wRC+ on the season against left handed pitching which is far below average.

The Rangers send Adrian Sampson who has a 7.64 ERA/6.62 FIP on the road this season with an astronomical 2.8 HR/9 rate. This Mariners offense is still pretty dangerous and this is a nice match-up for the Mariners to put up some serious runs.