Rory McIlroy is someone who is on my “no bet” list for a reason. I love the guy, I love the way he plays, but when he loses it’s always in a frustrating fashion.

Last week I took him off my “no bet” list as there was just too many reasons to bet him that I couldn’t ignore.

This time I’m putting him on my “no bet” list in permanent bloody marker.

Thinking back that seems about right. Truly is frustrating backing him when he always comes so close like that. There’s been a couple of times this year where I’ve backed him and felt like I was spending the money already only for that to happen.

Oh well. On that topic, I saw someone saying Rory “just plays for the sponsorship money these days”. What a joke statement that is. In saying that you could apply it to Hideki. He’s someone I normally don’t back and last week was proof as to why. Kills it in the first round and should have kept going but then struggled to even make par going forward.

We did have the one return with Tommy Fleetwood: 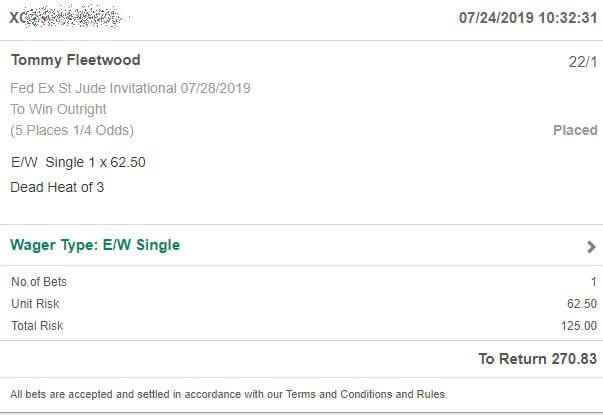 This week we’ve got the Wyndham and I’ve got a couple bets for it. Webb Simpson is rightfully the favourite but I just can’t bet him at that price.

I’m taking Collin Morikawa to win and Top 5. Of all the golfers in this tournament he is clearly the most in-form golfer. He should be motivated as well with this being the end of the season and I think we see a nice performance from Collin. His game suits this course too.

Rory Sabbatiini to win and Top 5. He’s playing well, and played well here before. The current/course form combo is enough for me but he stands out in the metrics suited for this course too.

I tried to talk myself out of it but have a small bet on Brandt Snedker to win and Top 5. The price is too tempting. It’s one of those where I mentally am not feeling it, but you can’t argue with the numbers.

Finally a small play on the 100/1 Nick Taylor to win and Top 5. No real reason – I mean he is playing okay at the moment and all. I’ve seen a lot of other people recommend him however and while I’m not really seeing it I think it’s worth the bet.