Welcome to this weeks combination of EPL Bets and Daily Fantasy Soccer.

It was a 1-3 result last week with the EPL Bets. What’s frustrating is that 94th minute penalty by Leeds which killed a 2.87 bet on Wolves. That killed what was a winning day.

It is what it is.

The less said about last weeks daily fantasy the better though. Ooof. Out of 3011 entrants we finished 2830rd. Brutal.

For the EPL this week I am on:

– Leicester vs Arsenal Draw. 3.50 odds. Arsenal been playing better. Pretty poor away this year but I liked their performance against Villa.

– Not a fan of trebles but on Man City, Chelsea and Liverpool all to win. 1.90 odds.

– Also see value in the draw Watford vs Southampton. 3.30 odds for that. 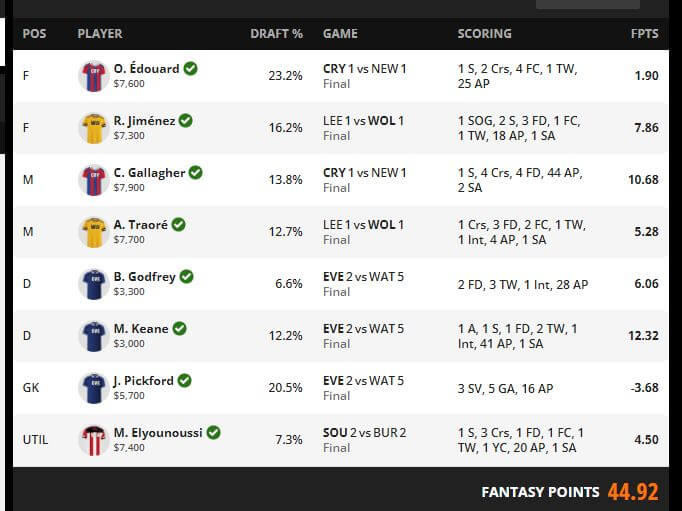 Like I said last week was a bloody disaster. Less said the better. Everton screwed us hard there but no-one performed well.

Let’s get onto this week:

GK – Ederson. Clean sheets are most likely to come from Man City or Liverpool this weekend. Brighton might be the tougher team, so I’m picking Ederson over Alisson

D – Virgil Van Dijk. Not going to stick all my eggs in the Man City defensive basket though. I wanted extra points from my defence, so thought about who was most likely to score or assist. Robertson at $5,600 was tempting, TAA too expensive at $7,500, so went for the bargain price of $3,800 for VVD in the hope he scores from a corner

M – Mateo Kovacic. Kovacic had a great game last time out v Norwich, granted everyone in a Chelsea shirt did, but two assists (5 in total for the season), leading in chances created and tackles won, he is the type of all round midfielder you need to pick up as many points as possible

F – Sadio Mane. Really wanted to spend big on Mo Salah, but that would have left $3,100 to spend in midfield. Mane has averaged 14 points per game this season and any of the front three who play for Liverpool are always a great possibility of picking up points

F – Riyad Mahrez. With us having a Chelsea midfielder and a Liverpool forward, first thing I wanted to do was add a City offensive player. Mahrez fit the ball in terms of price, average stats etc. Hopefully after his performance last time out they start him.

D – Neco Williams. Now I’ve no idea if he will start or not. It’s very likely he won’t. But I wanted a Liverpool or Man City defender who was cheap. I figure they are most likely for clean sheets and potential offensive stats. This is one I will check game day and see who is starting and go with what works within that price.

M – Bernardo Silva. Similar to above looking for a City or Liverpool player and he fit the bill.

Util – Juraj Kucka. Some good value on him at $4700. He hasn’t lit it up before but did last week against Everton and I think he brings that in here. Stats wise Southampton concede a lot from midfielders on tackles etc so he could rack them up.