Well last week ended up being a rather hilarious disaster.

We ended picking two players who started on the bench, and one player who got ruled out with COVID just prior to the matches.

Unfortunately, both of us were not around until just after the games started so we couldn’t even change our team!

Pity as there was some good picks in there. Sarr was a star for example. Here is the overall picks: 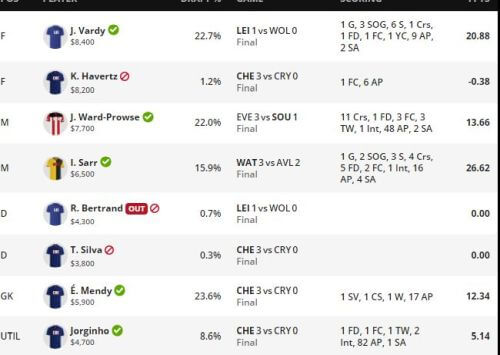 If it wasn’t for those three omissions, we would have likely cashed.

Week 1 shows that midfield is a big deal for stats – more important than clean sheets.

We are tracking our individual points with a big side bet and this is where we stand:

There are 4 games this week on the Saturday at 3pm which we will be entering. This is Aston Villa vs Newcastle, Crystal Palace vs Brentford, Leeds vs Everton and Manchester City vs Norwich.

M – Riyad Mahrez. Midfield is the first position I looked at and you have to think he is going to be strongly involved in the team and will be racking up the stats. Man City are looking for retribution after last week and this could be a big, offensive domination game by them. Especially with De Bruyne questionable, and Foden out. was tough between him or Grealish but Mahrez is a big home performer.

D – Ruben Dias: I was basically looking for a cheap defender. He started last week and likely will start this week. Good defender to have with an expected clean sheet.

Utility – Bryan Mbeumo. Generally want to look for a midfielder or someone who will be involved in some attacks for some cheap points in utility. Mbeumo had the scond highest shots & crosses for Brentford last week against Arsenal. And I mean despite the result it was still Arsenal so hopefully he will gain more this week. One I will specifically have to monitor in case Wissa get’s the nod.

GK – Ederson. Is the most likely keeper on Saturday to keep a clean sheet in a win, so that gives you 10 points straight away. With his passing ability too, he should pick up points for that, and wouldn’t surprise me if he assisted a shot or a goal due to one of his long passes over the top

D – John Stones. Should be a clean sheet here, so that’s 3 points in the bag. Norwich will probably go long and direct to clear their lines, so hopefully he can also pick up some interception points

M – John McGinn. Great week last week v Watford. At home to Newcastle should let him get a few more shots in, hopefully pick up a goal and with Villa probably getting more possession this week he will pick up passing points.

F – Raheem Sterling. City should score a couple against Norwich and while they have no main striker, Sterling could end up being their main man for most of the season.