It was a winning week for us last week in EPL Daily Fantasy.

We had to make some last minute changes but it was easy enough. Basically rotate players out of the position and replace with players from same position and team.

So for example – John Stones was out, so simply replaced him with Laporte.

The killer was Raheem Sterling being out though. We had the choice of Torres or Jesus and went with Torres. After his disallowed goal, he only got 3.26 points while Jesus got 20.58. 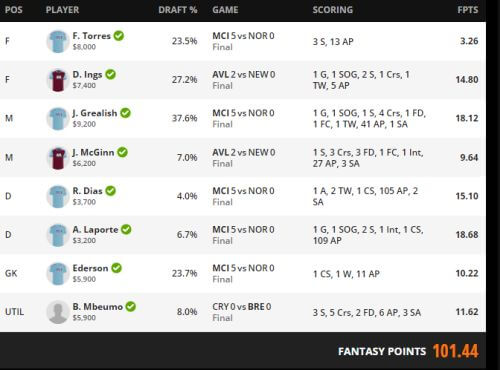 Here are the point tallies for both of us now with a big side bet on who does best over the entire season:

This week is a bit trickier with no clear cut “big teams” playing a smaller side. More fun though.

There are 5 games this week on the Saturday at 3pm which we will be entering. This is Aston Villa vs Brentford, Brighton vs Everton, Newcastle vs Southampton, Norwich vs Leicester and West Ham vs Crystal Palace.

G – Lukasz Fabianski: This was the tricky one I wanted to get out of the way first. Essentially what team is most likely to have a clean sheet. Brentford for example have two clean sheets this season, but are away and Villa have scored 2 goals per game so I decided to rule that out. It came down to Brighton or West Ham. Hanging my hat on West Ham who have conceded both games but are at home and Palace are yet to score and have worst xG in the EPL.

F – Said Benrahma. Just involved like crazy last two games with goals, assists, shots, crosses. Exactly what you want. He has M/F and that is important as with the above 3 and Fraser’s picks, I just had $6,000 left. That left me screwed for a striker, but allowed some flexibility in midfield.

M – John McGinn . Some good options here I went with McGinn as Villa should control the ball at home more and he should be involved. he was actually more involved in the away game against Watford, but I think should still be good for a solid 8+ points here.

F – Dominic Calvert Lewin. Great price at $7,600 considering he is averaging over 20 points a game so far this season. Scored in both games so far and will lead the line against Brighton where his chances of scoring look high.

M – Going again with James Ward Prowse. Hasn’t scored of assisted yet this season, but started off with two games against Everton and Man Utd. Away to Newcastle should see him get more of the ball and this could be the game for his set pieces to take centre stage.

D – Lucas Digne. The big plan this season is to play for clean sheets to get the points from defenders. Unfortunately, Saturday’s matches don’t have many locked in clean sheets. So I have looked at a home team who have the best chance for a clean sheet and went for a full back to see if we can add in some attacking points from him

Util – Allan. A couple of high prices mean I’m shopping in the bargain basement for a utility player. From Allan I’m looking for him to control the midfield a bit better than he has already this season. Will be honest, not overly convinced with this one!