The loss dropped the Giants to 4-10 on the season. They’ll have to win two games just to match last year’s win total of six, which was widely regarded as a success since they only missed out on the NFC East division crown by one game.

New York also received some brutal injury news on Monday. Per ESPN’s Jordan Raanan, starting quarterback Daniel Jones will be shut down for the season as he continues to deal with a neck injury.

Standout wide receiver Sterling Shepard suffered a left Achilles tear in Sunday’s game against the Cowboys, per Raanan, which will also sideline him for the remainder of the year. 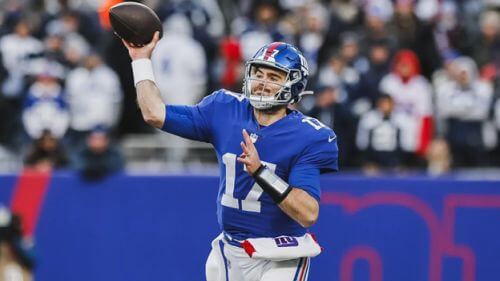 Fromm saw his first NFL action in garbage time against the Cowboys, completing six of 12 pass attempts for 82 yards.

New York sports betting lists the Giants as a 10-point underdog against the playoff-hopeful Eagles. With Jones and Shepard out for the season, the Giants will likely come in as underdogs for their final three games. After visiting the Eagles, they’ll travel to Soldier Field to take on the Chicago Bears in Week 17 (1:00 p.m. EST). Their 2021 season will conclude with a home game against the Washington Football Team (1:00 p.m. EST).

Take Eagles & The Points In Week 16

Several factors could cause the early line (Eagles by 10) to move. But for now, bettors in New York should feel comfortable putting money on Philadelphia.

The Eagles are simply the better football team, and they’ll have home advantage here. New York will be down to a second or third-string quarterback, and you can’t trust Glennon or Fromm to outplay the red-hot Jalen Hurts.

Even if the New York secondary manages to keep Philly’s offense in check — which they did in Week 12 with a 13-7 upset victory — it’s hard to envision Glennon or Fromm moving the ball against a stingy and formidable Philadelphia secondary.

Philly’s playoff hopes are on the line every game the rest of the way. They’ll be ultra-motivated and ready to defeat a banged-up and disappointing Giants team, so take the home team and the point spread.

Giants @ Bears: Wait For Spread, But Lean Towards Chicago

The Bears also fell to 4-10 in Week 15 after losing to the Minnesota Vikings 17-9 on Monday Night Football.

That was obviously a super positive development for the Giants, since they own Chicago’s 2022 first-rounder as part of the blockbuster trade that allowed the Bears to move up and select quarterback Justin Fields with the No. 11 selection. 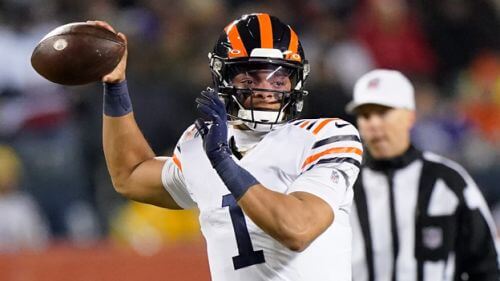 Fields has shown plenty of promise despite playing behind a wretched offensive line (he’s been sacked 36 times in 12 game appearances), and a lackluster supporting cast. Darnell Mooney is the only pass-catcher that has exceeded 500 receiving yards up to this point.

The Giants and Bears feature strong playmakers on defense, but they both lack the explosive pieces on offense. Their Week 17 showdown has all the makings to be a low-scoring affair, and it’d be a surprise if either team was favored by more than a touchdown.

In the unlikely event that Chicago is listed as a favorite of eight or more points, consider taking the Giants. In a game that features two turnover-prone and sluggish offenses, it figures to be a very low-scoring and punt-filled affair.

If the spread is, say, five points or less, by all means, consider taking the Bears here.

Fields and star running back David Montgomery are easier to trust than Glennon/Fromm and the rest of New York’s offense. And the pass-rushing duo of Akiem Hicks and Robert Quinn should be more than enough to make sure the Giants’ don’t have a field day on offense.